Las Vegas in the Aftermath 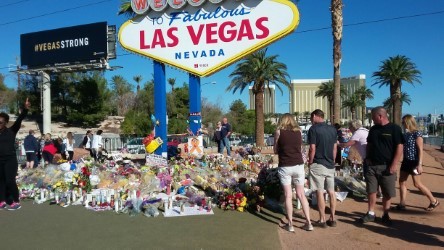 Visiting Las Vegas in the Aftermath

When I heard about the mass shooting in Las Vegas, I thought of 9/11 and I felt the same sick feeling in the pit of my stomach. I was at the gym at the time and noticed that a friend of mine hadn’t greeted me with her usual chirpy demeanour. What’s wrong? I asked and when she told me, I hurried home.

On the drive home, I turned on CBC radio and heard Heather Gooze, a bartender in Las Vegas, who had helped the wounded when the mass shooting started. Gooze found herself holding a stranger’s hand, that of Jordan Mclldoon, a 25-year-old man from Maple Ridge, my home town.

Gooze recounted the moment Jordan’s hand went limp and he passed away. With his cell phone, she was able to contact his mom and his girlfriend, Amber, and had the terrible task of informing them that he hadn’t made it. Then she comforted them and stayed by Jordan’s side for four hours. Gooze was crying as she told her story and I remained in the car after I’d arrived home, listening and crying too. I wished I could give her a virtual hug across the miles.

Michael, my husband, was waiting for me at the front door. We both looked at each other, thinking about the family reunion we were to attend in Las Vegas, less than one week away. My brother lives in Las Vegas and my sister was flying in from Ohio, a sister, that neither my brother and I had seen in 30 years. Although we’ve always kept in touch by phone, my sister doesn’t travel. She’s anxious and afraid to fly. It took us ten years to persuade her to make this trip. This Las Vegas holiday would be her first holiday ever.

We were afraid she’d cancel. We were afraid the happy reunion we’d envisioned would be spoiled by the tragedy. The city would be depressing and sad. How could it not be? I thought if I laughed or sang or danced at The Australian Bee Gees Tribute Show, (my sister and I love their music) I’d feel a kind of survivor’s guilt. I hadn’t lost anyone in the attack, yet like many others, I have been deeply affected by it.

Martin Luther King, Jr. said, “We are caught in an inescapable web of mutuality, tied in a single garment of destiny. Whatever affects one directly affects all indirectly.” Events like what happened in Las Vegas makes us feel that the world is a terrible place. We feel the ache of disillusionment, even though we’re not surprised. I worried that visiting Las Vegas so soon after this tragedy would be terrible.

I was wrong. It was a good time to go. People in the city (tourists, residents and workers) seemed connected by a common bond. It was as if people had decided to show their best selves. Everyone seemed more welcoming and helpful than at other times when I visited. The sense of connection among people was palpable. One small example among many, my sister, had difficulty walking in the heat and had to stop to catch her breath. A stranger waiting in a van got out and handed her a bottle of water, without a word. We stayed at the Tropicana, in view of Mandalay Bay. The staff couldn’t do enough for us. Maybe it was their way of resisting the kind of hatred and resentment that led to such a heinous act.

We visited the Memorial along Route #91 under the Welcome to Las Vegas sign where 58 crosses delivered by a retired carpenter, Greg Zanis. Zanis has delivered more than 20,000 crosses across the US for murder victims since 1996 when his brother was murdered. Millions of dollars in donations were raised for the victims and their families.

We also visited The Community Healing Garden, a half acre plot donated by the city, dedicated to the victims. Amazingly, the memorial was completed in four days with thousands of volunteers. Cement was poured, 58 trees were planted along with shrubs and flowers. When we visited, there were only 4 or 5 other people there, besides an old man quietly playing a guitar. This was a place to reflect, share stories and weep. It was a contrast to the Route #91 Memorial with hundreds of visitors. Both of these memorials were moving.

What struck me most was the resilience of the city. We saw the hash tag #Vegas Strong everywhere, on tee shirts and on the marquees along the strip, along with the phrase ‘When things get dark, Las Vegas shines.’

To be honest, I’d never been a fan of Las Vegas before now, even though my brother and his family live there, but somehow the tragedy that broke the city’s heart revealed its tender centre. Las Vegas will never be the same but the forces for the good rallied around her, And for that reason alone, I will return. Plus my sweet sister, on her very first holiday, having never gambled, put in two dollars in a slot machine and won $1250 dollars.