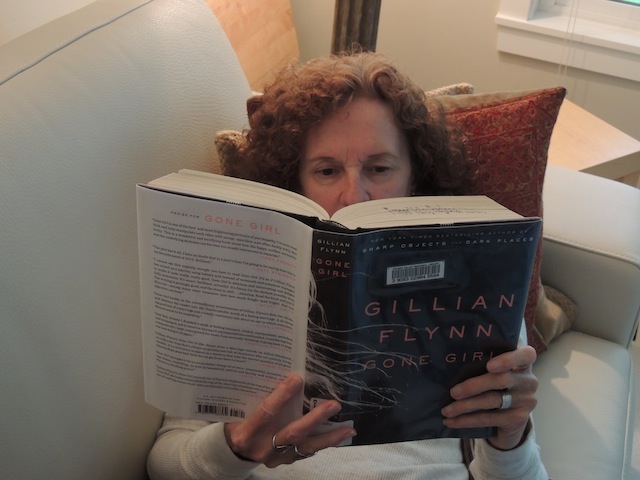 If you’re a writer struggling with plot, read Gillian Flynn’s novel Gone Girl.  You will be inspired!  Flynn knows  how to hook the reader, lead her down the garden path, only to reveal that all the assumptions she has made so far are false.  Flynn’s ability to surprise the reader with plot changes so dramatic and yet plausible, amazed me.  It reminded me of the surprising and clever plot changes in Breaking Bad.

This character-driven novel is as much about the disintegrating marriage of two charming psychopaths, Nick and Amy, as it is about the mysterious disappearance of Amy, Nick’s wife.  Has Amy been murdered and if so, did Nick do it?  And if not Nick, then who?  Although I disliked both Nick and Amy as characters, I kept changing my mind as to who I disliked the most.  They were both awful people, but fascinating in the way Rob Ford, the crackhead mayor of Toronto, is fascinating.  Gone Girl proves that you don’t have to make your characters sympathetic to keep the reader engaged.

I found Gone Girl hard to categorize.  It is part mystery, part psychological thriller and part black comedy.  Flynn has a number of hilarious one-liners throughout the book that made me laugh out loud.  Since I don’t have a particularly well-developed sense of humor, the lines have to be pretty darn funny to get a laugh out of me.

On the other hand, Gone Girl creeped me out (though in a good way).  I had a similar response when reading Lionel Shriver’s We Need to Talk about Kevin, a story about a school shooter and his family.

In the hands of a masterful writer like Gillian Flynn, Gone Girl, portrays the inner workings of the minds of two fascinating psychopaths that try to out-manipulate each other and at the same time manipulate the reader.  If you want a scary but exhilarating ride, read Gone Girl.  You won’t regret it.