The Cabin as Sanctuary, Winter 2018 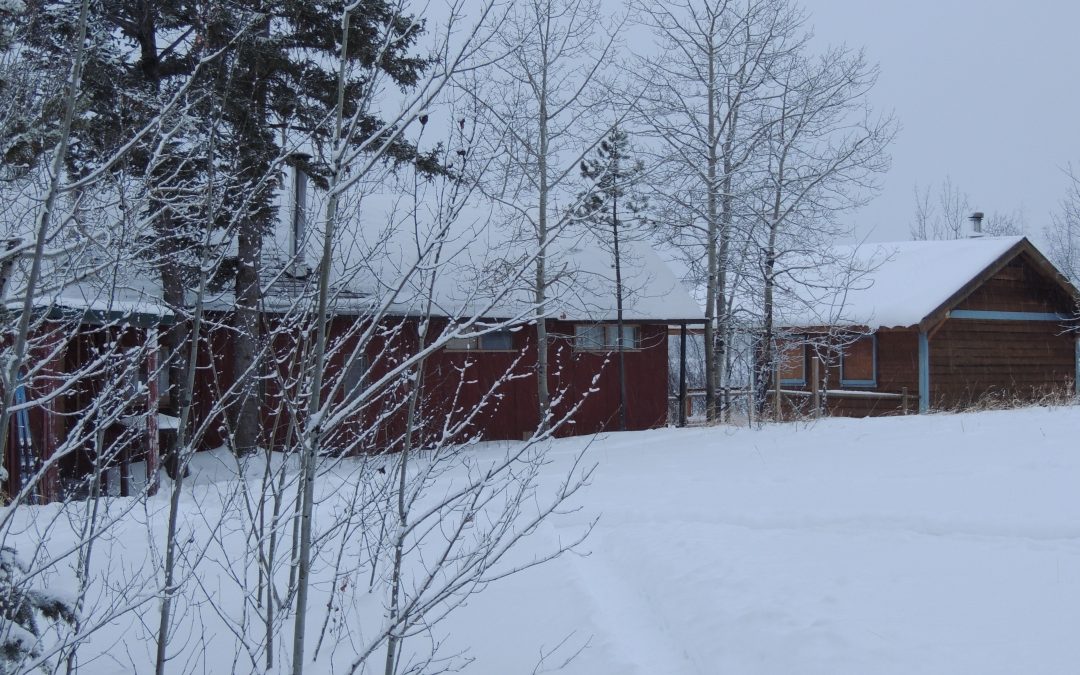 Winter 2018: The Cabin as Sanctuary

It was 28 below when Michael and I reached Meadow Lake Road, between Clinton & Hundred Mile House only to discover that the road was not yet ploughed. Night had already fallen and driving 40 k through a foot and a half of fresh snow was a bare-knuckle ride. We both realized that we’d been crazy to leave home so late, but our early start had been hampered by a road closure earlier in the day due to an avalanche. The drive took much longer after Michael ended up pulling out two other vehicles stuck in the ditch. One guy had spent 4 hours shovelling snow before we arrived.

We finally reached the long driveway leading to the cabin at 11:30 at night and loaded up the sleigh to pull enough supplies for the next 25 days. It took 15 to 20 trips back and forth like mules as the snow was too deep to drive our truck in. By 2 am, we finally heated up some soup and toasted our ‘adventure’ with a glass of wine. I had fired up the wood lstove hours earlier but the cabin was still freezing. We were wearing hats and three layers of clothing when we finally dragged ourselves to bed, happy in spite of everything, to return to our second home.

My goal for the three and a half weeks was to work on the third draft of a novel. One of our rituals after a day of writing was sitting by the wood stove drinking a glass of wine and watching the fire. Watching the fire was an occupation of Thoreau’s too. He thought of the fire as a ‘companion’ for he always saw a face in the flames. I’ve always loved watching the flames too. Nothing’s sweeter than hearing the spit and crackle of a fire, the ritual of carrying logs inside and stoking the red hot coals. The radiant heat, unlike that of a conventional furnace or our gas fireplace at home, was like having a cozy blanket wrapped around your shoulders or your stocking feet.

The cabin contains another world, a sanctuary, closer to nature and its moods. Our cabin looks out over the frozen lake and from the many windows in the kitchen and main room, we could often spot wildlife walking past, unaware that we were inside, or more likely, we could tell which animals had paid us a visit after dark, by the fresh tracks we discovered the next morning. We knew a cow moose and her calf hung around the cabin by the many tracks crisscrossing the meadow and the lake shore. I was slowly learning to identify each animal’s calling card (scat and tracks) under Michael’s tutelage, a former wildlife guide and biologist, tracks from sharp-tailed grouse, pine martin, weasel, varying hare, deer, coyote and fox.

After we cut a ski trail through the bush, we discovered that the following day, a moose had followed our trail, punching large hoof holes below the surface of the snow. On a different ski trail, we discovered a deer had placed delicately small hooves into our ski trail.

Cariboo mornings are cold. Your feet pad across the cold floor. It will take several hours for the cabin to warm up. Snow drifts across the frozen lake, looking like waves. A moose beds down near a juniper bush. We can see the deep depression in the snow and some nearby droppings.

Winter at the cabin is quiet and a little unsettling, though it’s the perfect atmosphere to write. There are few distractions, except the odd flock of birds which excites Michael who grabs his camera and binoculars. And then there are trips to the outhouse, a building which, thankfully, has heat and light.

By the second week, the quiet is broken by the Cariboo wind. It howls around the corner of the cabin, pushing the upper branches of a nearby aspen against the cabin walls. Tap, tap, tap. The wind sneaks in every crack and fissure in the walls and suddenly the cabin is hard to heat. To keep warm, especially as we’re working, we find it necessary to turn on the expensive radiators as well as keep the wood stove going at full blast. From inside we watch the wind bend the branches of the pines and aspens. The wind continues howling for almost a week and then the power goes out just before we were about to go to sleep. After lighting candles, and reading by flashlight, we turn out the lights but by morning the power is back on.

By the last few days of our retreat we’re feeling bushed. Our daily rituals, the meals and banking the fire and skiing is beginning to get old. We’re already back in the city in our minds. Ying and yang: the pull towards quiet and contemplation and the desire for stimulation and excitement that a city brings.

And yet for creativity, there is nothing like the sanctuary of the cabin, the sameness of the days, the quiet, the big sky, the wild. We load up empty coolers, computers and stacks of books into the sleigh and like mules haul our stuff to the truck where we will pack up and head home. We’re excited to be back but the yearning for quiet will begin sometime in the months ahead, when once again, our minds will begin to inhabit that other world.